How My Digital Buildings optimized space in a helicopter hangar

Meeting a need for space optimization in a busy helicopter hangar, My Digital Buildings used a NavVis M6 to map an area 500m2 in only 15 minutes.

How do you optimize the space in a commercial helicopter hangar? It’s not as simple as digging out the floorplans and scribbling down some ideas. It takes time and planning. And an active aviation business with machines in heavy use throughout the year can’t afford the risk of a surveyor with a terrestrial laser scanner gumming up operations.

The laser scanning professionals at French company My Digital Buildings have a solution. Using a NavVis M6 Indoor Mobile Mapping System (IMMS), they scanned a hangar of 500m2 in just 15 mins, with minimal commotion or disruption to the business of their client. Technical Director Emeric Mourot and his team digitized the space, visualized the existing layout in 2D and 3D, and provided precise measurements for simulating the new layout.

"The NavVis M6 allows us to go much faster on readings without compromising on the quality of 3D capture."

Their client is Helisair, a commercial aviation company that specializes in transporting passengers all over the Alps region. Based at Grenoble aerodrome, they carry out panoramic helicopter flights over the mountains, plus unique services for major events such as the Tour de France and Monte Carlo Rally.

Helisair owns several models of helicopter that are stored in a high-bay hangar. The northwest side of the building is equipped with large sliding doors that open almost the full width. Inside, on each side, shelves are used to store consumables and tools for routine maintenance of the machines. 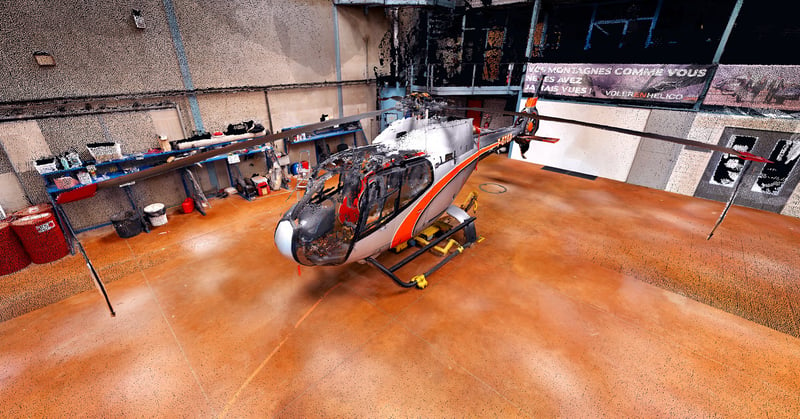 Point cloud of the helicopter hangar, captured by My Digital Buildings with the NavVis M6.

My Digital Buildings decided to use the NavVis M6 to quickly cover the area. The team capture both 3D data and HD panoramic photos along the mapping trajectory, taking one 360 ° photo at every two meter interval.

“We use a latest-generation mobile laser scanner designed and developed by NavVis. The NavVis M6 allows us to go much faster on readings without compromising on the quality of 3D capture,” enthuses Mourot. “It has the huge advantage of capturing 360° images in addition to the point cloud. This is the ideal tool for a varied exploitation of the data.”

Using the NavVis M6, the team required only 15 minutes to cover the 500 m2 of the hangar with the trajectory shown in the picture below. This image is a 2D projection of the 3D point cloud. The red dots indicate where the panoramic photos were taken. 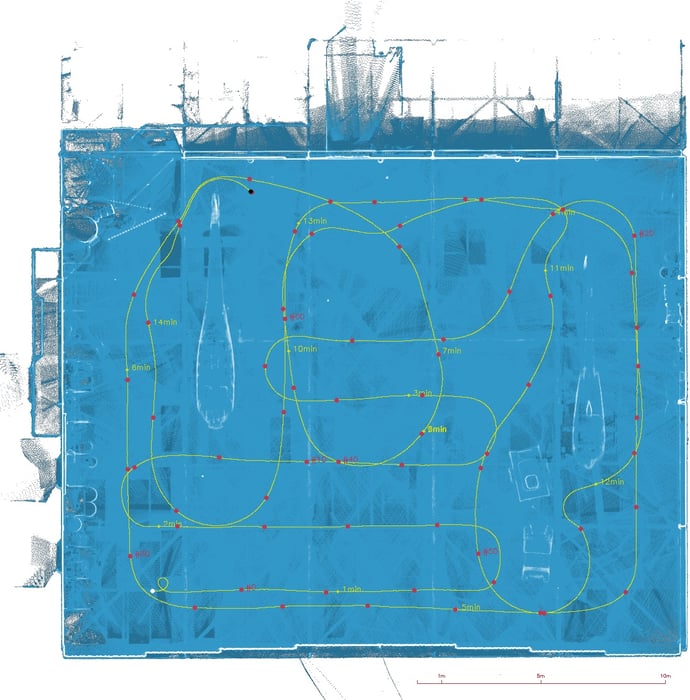 The hangar was scanned in just 15 minutes, complete with loop closures and slam anchors.

Post-processing and delivering the data with NavVis IndoorViewer

The quality of the resulting point cloud depends entirely on the path taken during the capture. But optimization is also important to limit the volume of data captured; excessive data is redundant, clutters the storage servers, and is a drag on post-processing and usage.

In this one scanning session, My Digital Buildings had obtained a global point cloud with a density of 5mm (the distance between two points of the cloud) and 68 panoramic photos. In total, the raw data amounted to 3 GB.

"The NavVis M6 has the huge advantage of capturing 360° images in addition to the point cloud."

This is where the post-processing phase begins, to filter and improve the point cloud, and to assemble panoramic views from the photo imagery. According to Mourot, the processing time on one of their servers was around two hours.

Next, the building scan data was published to NavVis IndoorViewer, where building stakeholders were able to see points of interest on both the 2D plane as in the photorealistic view. To find fire extinguishers, for example, entering "ext" in the search bar calls up a list of available extinguishers. 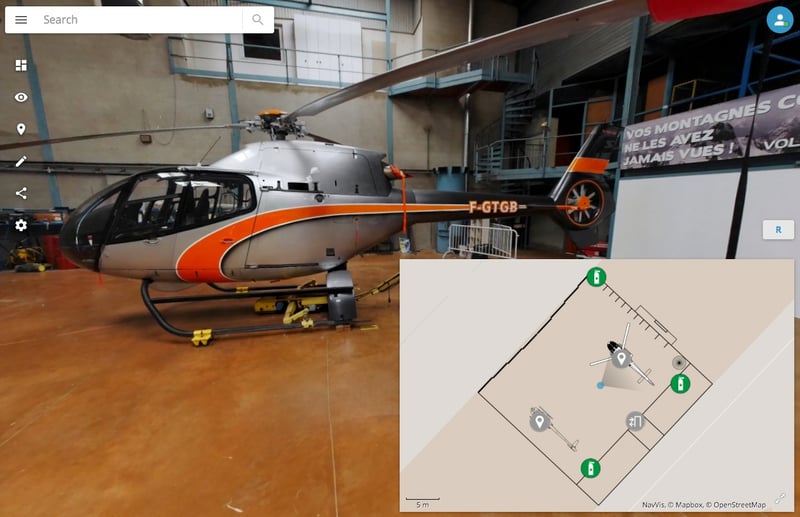 Points of interest in the hangar, like fire extinguishers, are easy to find within NavVis IndoorViewer.

Using 2D and 3D floorplans to optimize the hangar

The 2D floorplan is visible in NavVis IndoorViewer in the lower right window. This plan appears on a map background that also gives the situation of the building on a more global scale.

Another value-added deliverable that would have been possible is to redraw a 3D model over the point cloud that has been captured. Many tools include advanced options for detecting shapes and replacing them with 3D objects; these include Autodesk Revit, for which a dedicated NavVis IndoorViewer plugin is available.

"This is the ideal tool for a varied exploitation of the data.”

Regardless, now that a fresh scan of the site has resulted in up-to-date as-built documentation, the team at My Digital Buildings were now able to simulate and test new layouts for equipment in the hangar.

In this instance, the approach from the 2D plane was chosen and the work was done only from this perspective. Given the impressive height of the hangar in relation to the objects being stored, there’s little chance of anything colliding with the ceiling.

Simply by integrating the 2D framing boxes (blue lines below) for both the fuselage and the rotor, it is possible to move the elements and optimize the space. In this warehouse, for example, Helisair can maximize their existing capacity to hold two EC120 and two R44 helicopters.

With the space now optimized, hangar capacity for helicopter storage is doubled.

A convincing argument for spaces big and small

Whether for an aircraft hangar or more generally for industrial storage or storage, every business owner knows the importance of optimizing their indoor spaces. Making it happen, however, is a question of cost, organization, and productivity.

This simple and pragmatic use case by My Digital Buildings demonstrates a thorough approach to mocking up different interior layouts based on point cloud data generated by the NavVis M6. Beyond these simulations, the 3D point clouds can be used by the owner and their architect to develop the site further.

Another asset is the photorealistic tour in NavVis IndoorViewer, which can also be used for the promotion of the company and its activity. Not at all bad for just a quarter of an hour’s work!

How LevelS3D mapped the République Métro in Paris, one of the largest subway stations in the city, in two days using the NavVis ...
Start Reading
Bulent Yusuf Jul 23, 2019 5 min read

How to create interactive digital floor plans with NavVis IndoorViewer

See how easy it is to make interactive digital floor plans for your building with NavVis IndoorViewer, a web application with ...
Start Reading
Bulent Yusuf Aug 13, 2019 3 min read