Software & the laser scanning industry: An interview with NavVis's CTO

Previous
Next
NavVis CTO Georg Schroth on the "software eats hardware" revolution in the laser scanning & AEC industries and what's up next for NavVis.

Recently, I had the chance to sit down with the Founder & CTO of NavVis, Georg Schroth. We chatted about software vs. hardware, where the laser scanning industry is moving, and some plans and ideas he has for NavVis in 2023. Read on to find out more and get a preview of what's to come.

Q: It seems that we like to focus on hardware developments in this industry, like the new scanner and the latest hardware upgrade. But NavVis seems to believe that software is equally important to the future of 3D mapping. Can you explain why?

Hardware is still improving, but we have already seen that those improvements are slowing down. Today, you don’t see too many new terrestrial laser scanners being announced. And if there is an announcement, the new hardware specifications do not usually account for the big step forward.

Most laser scanning developments today, even in TLS, focus on software. They’re focused on making your workflow simpler, enabling you to scan faster, and helping you to deliver value faster to the customer.

And that’s the case even more so in mobile mapping. At NavVis, we are already using rather standard hardware — the key to the benefits is really in the software that processes the data generated by the multi-beam scanners. And here, we are far from a saturation point.

This push for improvement with software has just begun. We can generate so much more detail and extract so much more information from those multi-beam scanners. We can get an even better and more complete representation of reality.

And in the end, this is obviously the same as in every other industry: software eats hardware. So, when you invest, you really want to make sure that you’re choosing a company that will make these investments into the software.

Q: NavVis already offers free, regular upgrades to customers, even upgrades that improve the hardware they bought years ago. How are you planning to continue this in 2023?

Today, service providers scan a building once and then hand the floorplans and point clouds over to their clients. The reason is that, once you come in, the client wants you to get the work done as fast as possible because it's so expensive, so you only scan once.

The problem? Once something in the building has changed, they would like that information captured too. And ideally, they would want that new information gathered continuously because they want to be able to rely on the data when they use it.

For example, a construction site would benefit from efficient rescans. Let's assume certain craftsmen have already installed the HVAC system or some MEP (mechanical, electrical, and plumbing). And they get that documented. When the structure is finished, they can use the data to “look through” the walls and the roofs and see what's going on in the hidden areas of the building.

People want this data, but they won’t usually get a surveyor in to capture it because it's too expensive.

Q: How is NavVis going to use software to solve this problem?

So, let's assume you already have scans for the second or third floor. And you go through it again with NavVis VLX, using the control points that you used before. And you scan only those areas that have changed or have significant parts that you want to document.

It makes continuous capture easier because it enables you to scan anything inside the building that you've already scanned. And when you scan an area again, the data will be merged nicely into the existing scan. You won't have ambiguities or overlapping sets of data — for example, scans captured on two different dates. It will look as if you have scanned in one day.

And that will make the scanning costs much lower because you only have to scan what has changed and not the whole building again.

So that's one part. The other update is about blurring. Especially if you scan outdoors, you’re going to capture images of people, and they don't want that — quite understandably — and you are not allowed to use the data without some kind of blurring. And this has been relatively cumbersome, so we’re working on integrating this into our post-processing.

Q: What is the long-term vision for NavVis’ Reality Capture Solution? What will it look like in five years? What will it be able to do?

The vision is to use software to make the NavVis Reality Capture Solution affordable and accessible for anyone.

Think about the smartphone cameras that most people are using today. They are mostly software-defined. And now there's an abundance of possibilities that are coming from that democratized hardware. Anyone can use them to document reality with pictures and exchange that documentation quickly and easily.

That’s what I really want to achieve for 3D capture. I want to use software to make it so everyone can capture reality in its third dimension. And that’s obviously a very, very large mission. Even considering that we are focusing primarily on professional services.

But that’s the right area to focus on because the people who are in the profession of planning the built world are the ones planning the future. To do that, they need to understand how reality looks today.

That’s not always possible today in professions like construction management. Every time they use a camera by itself, they wish they could capture the third dimension as well. And that's where I would love to have NavVis VLX positioned. I want it to be so affordable that people don’t even think about whether to use a camera or a laser scanner, they use a reality capture device that does both. 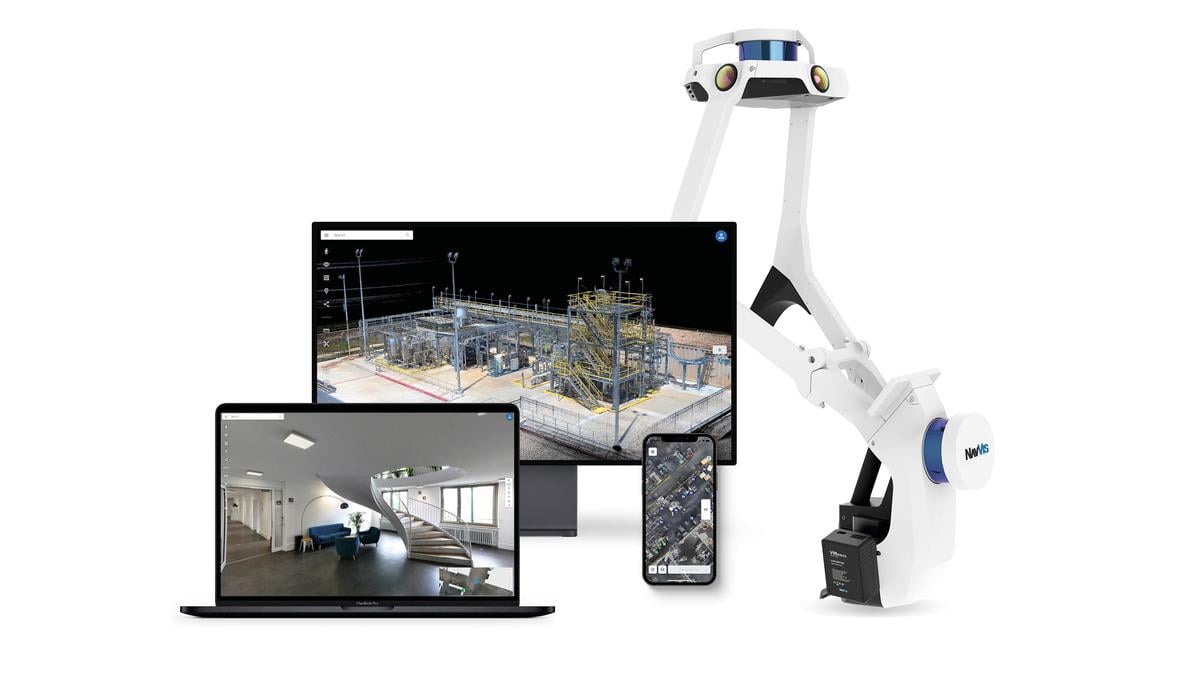 Q: It’s clear that software is capable of some incredible things, like reducing the cost of hardware and lowering the barrier to entry for 3D scanning. But are there any risks we should keep in mind as laser scanning becomes more affordable?

One important thing? I’m indeed worried about vendors that offer a low price point, achieved with low hardware cost, and who invest very little into processing software. The result is hardware that produces unreliable data but looks similar to systems that produce data quality on a completely different level.

One example is tripod scanners that offer something like two centimeters of accuracy and cost less than 10k.

This will make it very tricky for architects or others that need this data to be able to say, “Okay, who can get me the right quality data?”

One way to counter that as a laser scanning professional is to educate. But that has its limitations, as there's only so much time to communicate. The other way is to offer data at high quality, high speed, and low cost — which is possible if you have the right skills and you’ve made the right investment into mobile mapping.

Another way to counter is to provide your clients with much more than floor plans and point cloud files. Speaking about a construction site, remember that architects and construction companies don’t even know that you can help them to identify unplanned changes. As an experienced laser scanning provider with knowledge of your client’s specific work and needs, you can educate them about this service and then provide it. That’s something that “unprofessional” providers can’t compete with.

And if you’re not sure how to do that, our customer success managers have the background to help.

Q: As a last thought – many companies are moving to a subscription, or software as a service (SaaS) model, for their software these days. Has NavVis considered this model?

Yes. In the past, we have seen that laser scanning was always about big upfront investments. And that meant you had to be sure that in the future, you’d continue to make a return on your investment. But predicting the future has never been harder than today.

With COVID-19, there's an unsure economic situation. And in such a scenario, some people would rather make fewer financial commitments. Because they might not feel as confident as before.

However, that doesn’t fit the old way of buying software. In the past, you would get a CD or download of Microsoft Office for 5,000€ upfront. Then, you would use this software, sometimes without any updates for several years, until it wasn't compatible anymore.

Now there’s a new way of doing business. You pay a number of euros monthly or yearly, and you always get the most up-to-date service. You don't have to install it, you don't have to care about maintenance, and so on. And the big benefit is that you can cancel this anytime if you don't feel it's the right value for you anymore.

That SaaS model will eventually come into every industry, including AEC and even the laser scanning industry. And that is something that we want to want to invest also ourselves because we believe it's the future.

So, in the future, we believe that will mean less upfront cost for our customers. That’s okay for us. It's possible for us because we don't have the complex, expensive hardware that some others have. Rather, our investments and money are going into software development.

Interested in learning more about the NavVis Reality Capture Solution and how it fits into your business? Reach out to a NavVis expert today or subscribe to the monthly newsletter to stay in the know.

NavVis Mapping Partner Cognica share with us their thoughts on NavVis VLX and how it could complement NavVis M6 in tackling ...
Start Reading
Bulent Yusuf Dec 1, 2020 4 min read

NavVis went behind the scenes at the Deutsches Museum to field-test the new NavVis VLX, our revolutionary wearable mobile ...
Start Reading