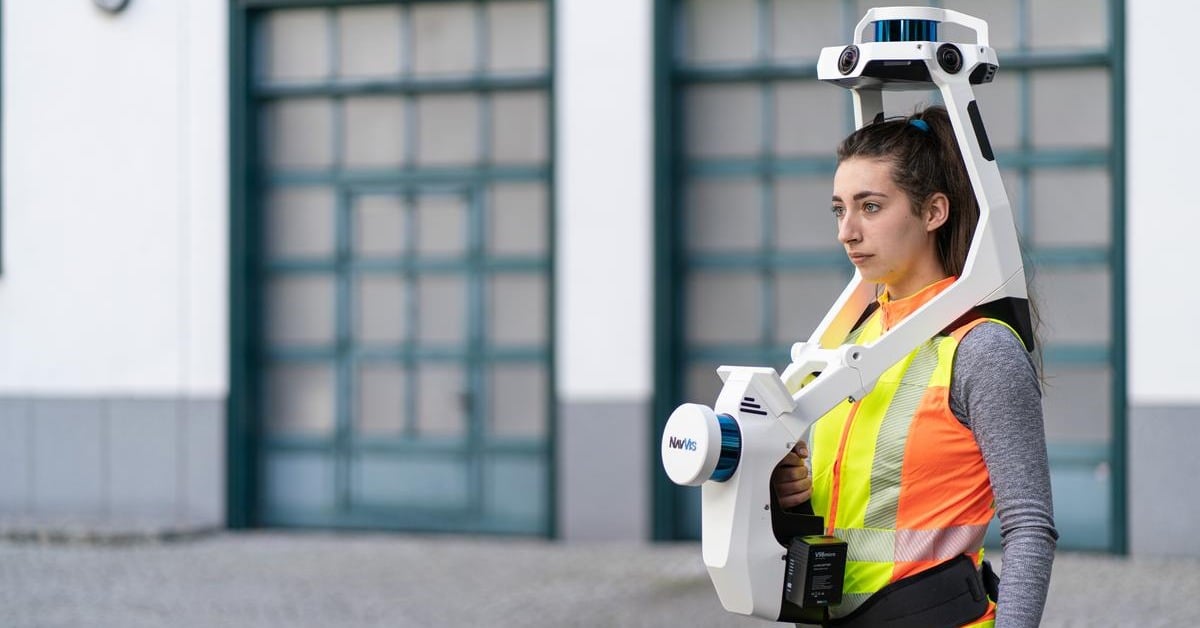 Let's explore SLAM technology, including the basics of what it does and how it works, plus real-world tips for ensuring top-quality mobile mapping results.

The benefits of mobile systems are well known in the mapping industry. Compared to terrestrial laser scanners (TLS), these tools offer faster workflows and better coverage, which means reduced time on site and lower cost of capture for the service provider.

To experienced 3D professionals, however, mobile mapping systems can seem like a risky way to generate data that their businesses depend on. That’s because mobile mapping systems rely on simultaneous localization and mapping (SLAM) algorithms, which automate a significant amount of the mapping workflow. This automation can make it difficult to understand exactly how a mobile mapping system generates a final point cloud, or how a field technician should plan their workflow to ensure the highest quality deliverable.

To help, this article will open the black box to explore SLAM in more detail. We will cover the basics of what the technology does, how it can affect the accuracy of the final point cloud, and then, finally, we’ll offer some real-world tips for ensuring results that you can stake your reputation on.

Simultaneous localization and mapping (SLAM) is an algorithm that fuses data from your mapping system’s onboard sensors – lidar, RGB camera, IMU, etc. – to determine your trajectory as you move through an asset.

Here’s a simplified explanation of how it works: As you initialize the system, the SLAM algorithm uses the sensor data and computer-vision technology to observe the surrounding environment and make a precise estimate of your current position.

When you move, the SLAM takes that estimate of your previous position, collects new data from the system’s on-board sensors, compares that data with previous observations, and re-calculates your position.

By repeating these steps continuously the SLAM system tracks your path as you move through the asset.

SLAM is a complex process – even in the simplified explanation above – but you can think of it as being like the traverse method in surveying. For a traverse, a surveyor takes measurements at a number of points along a line of travel. When the surveyor moves to measure each new point, they use the previous points as a basis for their calculations.

A SLAM algorithm performs this kind of precise calculation a huge number of times every second. Put another way, a SLAM algorithm is a sophisticated technology that automatically performs a traverse as you move.

To understand the accuracy of a SLAM device, you need to understand a key difference in how mapping systems capture data.

A terrestrial laser scanner (TLS) captures an environment by spinning a laser sensor in 360° and taking measurements of its surroundings. Since it fires from a fixed location, each measurement in the point cloud it captures is already aligned accurately in space relative to the scanner.

A mobile mapping system also spins a laser sensor in 360°, but not from a fixed location. Since you’re walking as you scan, you’re also moving the sensor while it spins. This causes alignment errors for each measurement and degrades the accuracy of the final point cloud.

You’ve experienced a similar phenomenon if you’ve taken a photograph at night and moved the camera, causing blur. Likewise, if you look at the raw data from a mobile mapping system before it has been cleaned up by a SLAM algorithm, you’ll see that the points look messy, and are spread out and doubled in space.

A mobile mapping system is designed to correct these alignment errors and produce a clean, accurate point cloud. To do this, it uses the trajectory recorded by the SLAM algorithm. This data enables it to determine the location of the scanner at the time that each and every measurement was captured, and align those points accurately in space.

That means the accuracy of a SLAM-powered mobile mapping system depends on more than the accuracy of the sensor itself. It also depends a great deal on how well the SLAM algorithm tracks your trajectory.

To develop SLAM algorithms that track your trajectory accurately and produce a high-quality point cloud, manufacturers faced the big challenge of correcting for two primary kinds of errors.

The first is called a tracking error. Tracking errors happen because SLAM algorithms can have trouble with certain environments. A long hallway, for instance, usually lacks the environmental features that a SLAM relies on, which can cause the system to lose track of your location.

The second kind of error is called drift. Drift happens because the SLAM algorithm uses sensor data to calculate your position, and all sensors produce measurement errors. Due to the way that SLAM algorithms work—calculating each position based on previous positions, like a traverse—sensor errors will accumulate as you scan. This causes the accuracy of the trajectory to “drift” and degrades the quality of your final results.

If you scanned with an early mobile mapping system, these errors very likely affected the quality of your final data.

The good news is that mobile mapping technology has matured substantially since its introduction to the market. Manufacturers have developed mature SLAM algorithms that reduce tracking errors and drift automatically. And mobile mappers now offer reliable processes for correcting errors manually, so you can maximize the accuracy of your final point cloud.

The most popular process for correcting errors is called loop closure. To perform a loop closure, simply return to a point that has already been scanned, and the SLAM will recognize overlapping points. This gives it all the information it needs to calculate any drift or tracking errors that have occurred and make the necessary corrections. You can think of a loop closure as a process that automates the closing of a traverse.

Though loop closure is effective in large spaces like gymnasiums, outdoor areas, or even large offices, some environments can make loop closure difficult (for example, the long hallways explored above).

For these cases, the more advanced mobile mapping systems offer a feature for locking the scan data down to control points. This process is also simple: Place survey control points, like checkerboard targets, throughout the asset to be captured. Next, capture their coordinates using a system with a higher level of accuracy than the mobile mapping system, like a total station.

As you scan the asset, capture the control points. The mobile mapping system will use that information to snap the mobile point cloud into place, reduce error, and produce survey-grade accuracy even in the most challenging environments. When accuracy is of the utmost importance, this is the method to use. 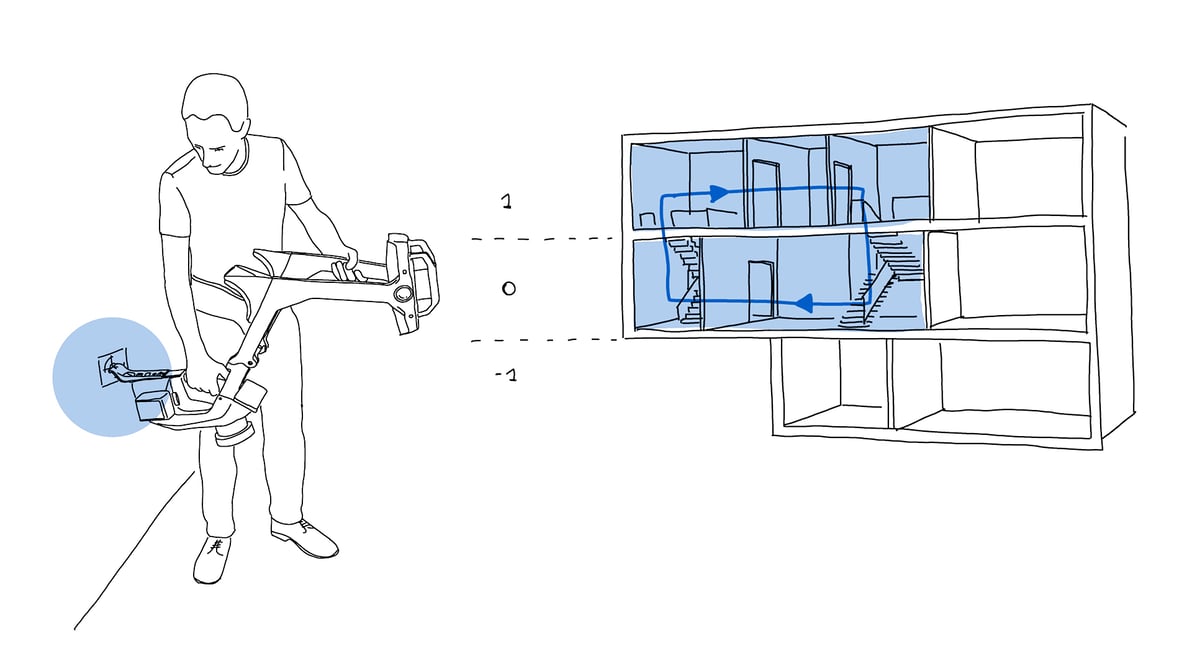 The SLAM algorithm is crucial

At this point, it’s important to note that each manufacturer uses a proprietary SLAM algorithm in their mobile mapping systems. These algorithms can appear similar on the surface, but the differences between them can mean a significant disparity in the final data quality.

That’s why the most important step you can take to ensure high-quality results is to research a mobile mapping system during your buying process, and learn the right details about the SLAM that powers it.

Learn what methods the SLAM algorithm supports for correcting errors. Can it use loop closure and control points? How well do these methods work in the environments you’ll be capturing? How does the manufacturer communicate the relative and absolute accuracy you can achieve with these methods?

Learn how well the SLAM algorithm performs in difficult situations. What accuracy can it achieve in long, narrow corridors? Or in large, open spaces? How does it handle reflective surfaces? Or moving objects, such as people passing by? Does it successfully level the scan in a variety of environments?

The answers to questions like these will tell you what kind of data quality to expect from the mobile mapper, and help you find a tool that you can rely on in the kinds of environments you scan for your day-to-day work.

A SLAM algorithm uses sensor data to automatically track your trajectory as you walk your mobile mapper through an asset. The mapping software, in turn, uses this data to align your point cloud properly in space.

Due to the way SLAM algorithms work, mobile mapping technology is inherently prone to certain kinds of errors—including tracking errors and drift—that can degrade the accuracy of your final point cloud.

Despite this, users have significant control over the quality of the final deliverable. By investing in a mobile mapping system that reduces errors effectively during the scanning process, and then performing the necessary workflow steps to correct errors manually, mapping professionals can produce high-quality results that their businesses can depend on.

To see our validated test data on the accuracy of NavVis M6 and NavVis VLX in a variety of challenging environments, and to learn how much our SLAM’s loop closure and control point functionality can improve the quality of the final results, download our whitepaper here. 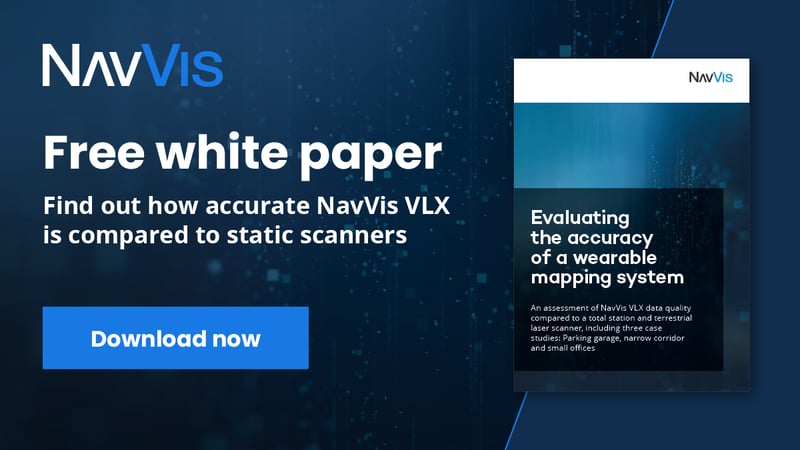 Does mobile mapping belong in surveying? These surveyors think so

Lidar vs. photogrammetry - which should you choose? Considering the goals and requirements of each project is key. Find out more in this post.